What do we stand for?

Our Guiding Principles: Network America believes that the 7 Principles developed by Guardians for Liberty will provide a sound basis which will also ensure the widest possible participation in the Precinct Project. We believe in preserving the Constitution and Bill of Rights. 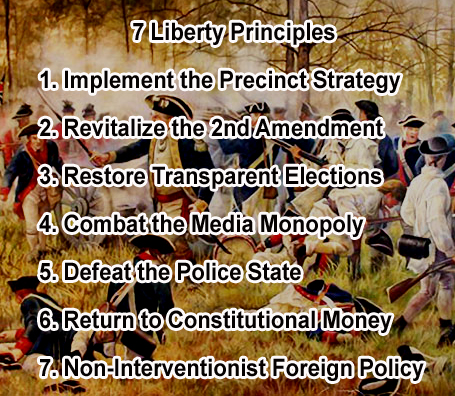 Democratic and Republican Party leaders control virtually every county in the USA and are working against the Constitution and the Bill of Rights. We encourage Liberty fighters to get involved as Precinct Captains/Chairs in their county, in the party of their choice, or as independents. The precinct captains elect county party leaders who endorse the candidates. Change the party leaders, change the lawmakers, and restore the Constitution. This is how we can take back the nation for Liberty, precinct by precinct, county by county, and state by state.

The first clause of the 2nd Amendment is the Founding Fathers’ vision for maintaining a free nation. In addition to restoring fully the right to own and bear arms individually. We must also restore the implementation of the first clause, which instructs each state to organize & train well-regulated, disciplined forces under the Governor, and under a designated local official in each county, to repel foreign invaders, to aid the citizenry during natural disasters, and to restrain public officials from violating the constitutional rights of citizens.

Secret Computer Programs now “count” the ballots in more than 99% of elections in the USA. Two standing Supreme Court decisions state that secret counts are illegal. The people must demand computer-free, machine-free elections. We must restore hand-counted paper ballots in each precinct, counted, posted, and reported BEFORE the ballots leave public sight.

A Ruling Elite controls news, art, and culture through a giant media cartel (especially ABC, CBS, NBC, CNN, FOX, AP, as well as related mainstream media such as Clear Channel Radio, Simon & Schuster, Sony, ATT, Verizon, etc). Americans must be made aware of this reality. We need to encourage, support and redirect people to independent, accurate news sources, and uplifting, liberty-minded, historically accurate programs, movies, music, and art, both on and offline. Americans must oppose any effort to stifle free communication and speech on the internet.

According to such sources as the Denver Post, Washington Post, and Forbes, The Department of Homeland Security has bought 1.5 Billion rounds of ammunition, 2700+ armored tanks to patrol the streets of the USA, and is building 30,000 killer-spy drones to fly over our nation. Other incursions against our freedoms are exemplified by the NDAA, the so-called Patriot Acts, Agenda 21, SOPA/CISPA, etc. We must defeat this encroaching Police State by defending the true freedoms of the Constitution and the Bill of Rights.

The Federal Reserve operates in secret and is destroying our nation’s money. Replace the FED with a Monetary Office under Congress as authorized by the Constitution, operating in the open, issuing interest-free money (redeemable in gold or silver, which have intrinsic value) to the nation, and ensuring that the nation’s money supply is approximately equivalent to available goods and services in order to facilitate the needs of business and commerce.

A Ruling Elite (behind international banking institutions such as the FED, IMF, and Goldman-Sachs)
has hi-jacked American Foreign Policy and is building an evil empire at odds with our national interests. Pursue honest friendship with all nations, entangling alliances with none (the policy enunciated by Thomas Jefferson and encouraged by George Washington in his Farewell Address).
Seek “Fair Trade” with non-slave nations.

“If ever the time should come, when vain and aspiring men shall possess the highest seats in government, our country will stand in need of its experienced patriots to prevent its ruin.”
– Samuel Adams

For more information on Guardians for Liberty, visit their website: www.GuardiansForLiberty.com