Most Powerful Office in the Land – Precinct Executive

1. You get to elect your county party leaders.

2. Determine the way the votes are counted in your county (i.e. ensure transparent, verifiable elections).

4. The state party leaders set the rules for how delegates are chosen for the National Convention.

6. The National Party Leaders set the rules for the National Conventions.

8. 95% of the time, the Endorsed Candidate wins the party primary!

9. The Candidates that win the Party Primary run in the November Elections.

10. Whoever wins the November Election takes office and sets the policy for the Nation.

Note for visitors in 2015: The below transcript is an excellent introduction to how powerful the precinct strategy is. In fact, it’s the only peaceful and constitutional strategy to take back America at this juncture. Mr. Herron’s speech was directed at pro-lifers in the Platform Republican group in Cincinnati, Ohio in 1988. The reader can substitute “2nd Amendment Group”, or “pro-Constitution Group”, or “Liberty Group” for “pro-lifers” if they wish, but grasp the strategy enunciated in the transcript below, and get involved with Network America’s Precinct System at www.NetworkAmerica.org/network. Organize and Socialize!

The Most Powerful Office in the Land

by Rick Herron
(Disclaimer for internet: Mr. Rick Herron gave this speech, and then approved this transcript of the speech, in 1988 for the Platform Republicans in Hamilton County, Ohio. The original talk and pamphlet was not copyrighted and was meant as a public service to go into the public domain for the benefit of the average pro-life voter in America who did not understand how our precinct system works. Mr. Herron has not been consulted on the posting of this public domain article on this website, nor should any endorsement of other items on this website, or any related website, by Mr. Herron be understood or implied by the posting of this excellent article here. Obviously, the precinct system is open to any group working on any issue or set of issues.)

Introduction to the Original Pamphlet

In 1986 Rick and Debbie Herron attended conferences put on by the FREEDOM COUNCIL. At this meeting the “nuts and bolts” of politics in the United States were explained. Rick Herron explains that the first time through he did not fully appreciate what he had heard.
When Mr. Herron’s explanation was first transcribed into print in 1988, 321 pro-life candidates for Precinct Executive were already on the ballot in the Republican primary in Hamilton County the county which houses Cincinnati, Ohio. Everyone was now looking forward to the primary in May which would then be followed by the Hamilton County Republican convention in June, 1988. The pro-life faction had adopted the name “Platform Republicans” to indicate that they wished the local party to begin nominating only candidates who strictly adhered to the pro-life, pro-family planks of the 1980 and 1984 National Republican Platforms.
Articles had already appeared in the Cincinnati Post, and the Cincinnati Enquirer; the Cleveland Plain Dealer, Ohio’s pre-eminent newspaper, had devoted front page coverage to the movement. Why all the excitement? The Herron article explains why hundreds of Cincinnatians had been persuaded to run for the office of Precinct Executive.

The Four Laws of Civics

“Why are we running for Precinct Executive? The main thing to keep in mind is our goal. What do we want to accomplish by this? We believe this project will actually get the law changed. (Note: Herron is here referring to the law permitting the killing of unborn children by abortion and the need to change the law to protect the right to life of these babies.)
“First of all, I would like to make clear that we don’t believe this struggle between the forces of life and the forces of death is some kind of a debate. If this were a debate, we would have won a long time ago because all of the facts, all the logic, is on the side of life. Obviously, it’s not a debate. We pro-lifers have been studying for debate while the enemies of life have been studying war. So guess who is winning the war? Whether we know it or not, whether we like it or not, we are in a state of war with the enemies of life. And don’t kid yourself, you are their enemy.
This war, this struggle, is being fought in the courts, and in the legislatures. Battles won and lost in this war are measured by government policy. Policy is the prize. And, right now, killing children is a policy of the United States. So our goal is to change the policy. So if policy is to change we must know how policy changes. This is where the four laws of civics come into play.

The First Law of Civics

is that People Are Policy. And what that means is if you want to change the law, if you want to change the policy you have to change the people that make the policy. And if you doubt that, try writing a letter to Howard Metzenbaum sometime.
“So how does the law change? Well, these Senators or Congressman up there they make a decision, they pass a bill the law changes. That’s basically all there is to it. If during a vote there are more of THEM, then THEY make the policy. If on the other hand there are more of US, then WE make policy. Personally I would like it better if we made policy. So how do legislators get in there where they’re in a position to change the policy? “Well, they’re elected in the November General Election in accordance with:

The Second Law of Civics

The Third Law of Civics

The Fourth Law of Civics:

“The Precinct Executive turns out to be THE MOST POWERFUL OFFICE IN THE LAND. And that’s why we are doing what we’re doing.” 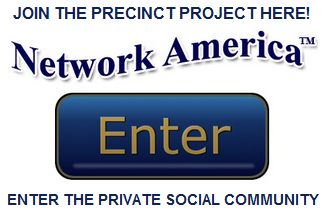