Dr. Annette Bosworth is Facing Decades in Prison! Why? Listen to Her Message… 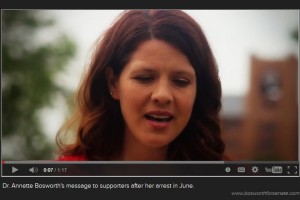 Historians and legal scholars alike seem to be in agreement that the charges against Dr. Annette Bosworth by the State of South Dakota are unimaginably harsh and have never been leveled against any political candidate, to this extent, in US history. Never has there been 12 felony counts charged upon any candidate for possible simple petition-gathering infractions. The case is based on only 37 legitimate voter signatures out of the thousands that she submitted in order to get on the Republican primary ballot in 2014 to run for US Senate.

It is asserted that since she was believed to be on a medical missionary relief trip to the Philippines at the time, that she did not personally witness those few particular legitimate signatures of her supporters… READ MORE here on the Examiner